New year brings hopes with it....

1st January:The first morning of 2010 started on a lazy note. I woke up several times, and then finally I actually opened my eyes at 11:30 am. It was a sunny day. I was happy not because I wanted to dry my skin in the sun but I was more interested in washing all my clothes as early as possible and dry them out in sun. The new sun in the sky enjoyed my sight first at 12:30 when I went downstairs to buy tealeaves and snacks for morning breakfast. Right now I am sitting at home sipping my cuppa of tea with my fingers on the keyboard. The day was really good. I took out all our unusable clothes and a pair of shoes and started searching for the needy on the roads of Pune. My brother advised me that doing charity of something which is not useful for me is actually not a charity. He read it somewhere and these words are from the great Mother Teresa. Well, everyone has his own philosophy; I don’t want to become a keen follower of everything what great people had said rather I would prefer following my own instincts, my own philosophy. Today I met lots of people, who choose road as their home, sky as their cover which had never been enough to hide their personal affairs from the world, making the optimum use of street light, forced to follow the principle of ‘vasudhaiv kutumbakam’ that’s a different thing that each one of them would never do if they have the resources. I felt guilty when I saw them wandering for the one time meal, leave the question of a set of clothes enough to cover the entire body. I tried to search the poorest and unluckiest among the crowd and then gave something to one of them. And a thought hit my mind that no one would have been struggling for clothes if only young generation of the India does something like this once in a month. I decided to follow the same practice every time whenever I have some extra clothes, shoes or anything which can be useful for someone.Then I spotted a quite old man crossing the road. He was wearing a smart hat with an old coat and was looking like an educated person. He brought a scene of the days when India was not free and I thought he must definitely be a Freedom Fighter. I greeted him with smile and took his left hand in my right hand, holding him just to pass a signal of support. I approached the middle of the road, he started tightening the grip of his hand and after 30 seconds we were at the other side of the road. The grip was so tight that it left the pink red color on my hand. I imagined how these hands would have handled guns in the Independence movement. The old man thanked me and showed his finger towards a building and wanted to say that he wanted to go there. He nodded his head thanking me as well as indicating that he would walk to his home himself. The old man left leaving me with some strange thoughts. My thoughts were a cocktail of devils and god. Then I tried to combine all my thoughts and a poem came out of that: 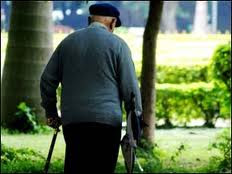 My skin has become clumsy now,
however I still poses a young heart;
So what if my kids visits me once in a year,
I can still enjoy my winter nights sitting at Perth.

I don’t sleep early in the night,
but I never miss the early cherry like sun in the creamy sky;
so what if I could not fly the way I used to fly kites,
I still enjoy my grandson playing with water bubbles, I love that sight.

So what if I have to look for a hand to cross the road,
I could still find the children waiting for me to listen to my guitar chords;
I have surrounded myself with the optimism of these natural things;
Sun, sky, moon, stars, wind, trees and sea I took all what they bring.
Posted by Hemant at 7:25 PM 2 comments: