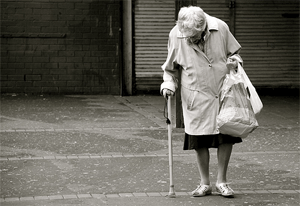 I actually stopped and allowed that 80 year old lady to cross the road. I don’t know how my hands automatically reached to stop my bike. She was looking so confident and almost stopped when she saw me approaching towards her, however she did smile when I stopped my bike and allowed her to cross the road at one go.

I still remember those eyes with wrinkles like deep water in a well. Her hair almost turned into light gray and her back was a little bent and her face was heading towards road but I should not forget to mention that her eyes were glimmering with sparks. And I realized one thing today that the smile of a baby and people with the age of 75 and above (if they are not politician) is the most sanctified thing in this world. It looks so simple, truthful and selfless. I kept smiling for almost 2 minutes after seeing the old lady’s smile.

And then he fell in love again. It was happening with him 3rd time when he started realizing that he could spend her whole life with a girl without reaching a saturation stage which he faced in her previous fairs (I don’t call it affair). All this started with one or two SMS exchanges everyday and reached the stage when two souls share each bit of the information about their life. I don’t know but this time he started acting very careful. From his experience, he knew that love is the thing which does not last for one second or one day or one month or a year; however it is something which is made to last till decades and centuries. He did not have any intention to take a decade for love to happen again but he was definitely interested to take some time and reach the comfort zone of communication which was a little ambiguous till now. She is so simple, beautiful (Take a broad meaning of this word) and redolent. She’s an introvert to strangers but super extrovert to people whom she has trust on. “Patience” is the word to describe her nature. A girl with all the madness with a dream of beautiful life. Well, it was not easy for her to describe or approach him but she did it whenever she got a chance. It was her first time when her relationship with a guy reached a level which can be described as “More than a friend”. But her core strength ‘patience’ always backed her from a direct approach to the guy. She always picked an indirect approach to explain her feelings to him. Someone has rightly said that we should not interpret what girls say from their words because they are from Venus. They have a different methodology to express them which has been a reason for so many break ups turning guys into Devdas and sometimes this approach of gals has been a reason of the great concern for even themselves. And that’s the reason he kept making mistakes interpreting every signal with the wrong meaning. She wanted to communicate something else and he understood something different. Why don’t all boys and girls read “Man from Mars Woman from Venus” at least once? The book really helps understand the psychology of men and women. Let me end on a happy note. I wrote this poem while I was waiting in an interview and a lady came and sat beside me: I wish if there would be a mirror in front of my seat, I could have watched her straight, clean and neat; When I saw her first time that stopped my heartbeat, I can’t say nothing but she has beautiful feet; I don’t know if her heart is as beautiful as she or it’s a cheat, this confusion certainly stopped me from going ahead and ask for meet.

Email ThisBlogThis!Share to TwitterShare to FacebookShare to Pinterest
Labels: Articles, Life is a Controversy