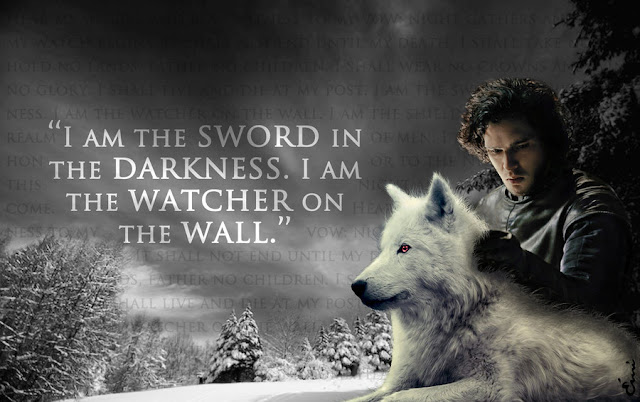 Don’t go by his weight or look
Like Valyrian Steel,
he looks like
Any other normal northerner
with as usual extraordinary zeal
Sharpest of all the Starks put together
Still considers himself as if
He is not really a big deal!!

Three brave men
From the same clan
With same values and valour
Ned Stark, Robb Stark and Jon snow
become victim of similar betrayal
Game of thrones gives us a simple lesson
Honor without life
Is as good as an empty Caisson!!

PS: Jon Snow is one of the most lovable characters from Game Of Thrones, it was a shock for his fans to see him die at the end of Season 5; however season 6 promo gave a clue that he would be back sooner or later. How did you feel about Jon Snow being stabbed by his Watch brothers? I was terrified!!

My love for Game of Thrones continues, tagging few more bloggers from A to Z Challenge.

Email ThisBlogThis!Share to TwitterShare to FacebookShare to Pinterest
Labels: Game Of Thrones, Poems